We just had a chance to test another tile placing board game. This time it was Tsuro.
So far I have played a two player game against Njam-Njam (its him on the photo). 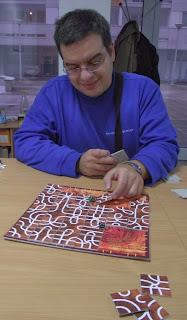 I have to say that tile placing mechanism is getting quickly up on my list of game mechanics.
Tsuro was just great.

We have played several games and as Njam Njam noticed, we were playing really non aggressive, each of us keeping to our own half of the board, and getting competitive only with last tiles.

With more players game should be quicker and should bring even more fun,  since interaction probably happens sooner.

A great game anyway. I wander if it can be played solo....

Posted by Aleksandar Šaranac at 3:50 PM