As I already mentioned in previous post, Tsuro is a nice filler puzzle like brain burning game that can be played out of the box. All this makes it a suitable choice for solo play by business father types like myself.

So, I created a solo Tsuro variant that suites me best. Variant is based on Path of conquest by S McCulloch.

Start with eight dragons arranged in starting positions around the board. Two dragons should be positioned on each side of the table, on exits 4 and 9.
Select one dragon to represent yourself.
Draw three tiles. Place a tile in a position to move your chosen dragon. Draw a tile. Continue drawing and placing tiles, moving your dragon each turn.

The goal of the game is to kill all other dragons by  making them collide to each other. Do not let enemy dragons escape by leaving the board. Collisions at the board edge are allowed and count as kill. 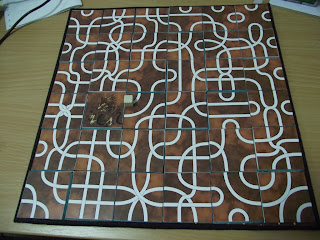 Posted by Aleksandar Šaranac at 12:04 PM