As much as I like to wargame, my private and business obligations take me away from it, and closer to boardgaming every day. And even there, my time is limited, so, as much as I like complexity and challenge of Mage Knight Board Game and especially Agricola, the setting for these games takes too much time.
Especially now, while my home is under renovation, I have started to appreciate games that literary do not need to be taken from the box to be played.

Castle panic is one of them. Very interesting combination of card and board game, extremely playable solo, where every game is decided in last turn.
I do not own the game yet, the one I play is borrowed, but I like it so much that I have already ordered original game together with a Mage Tower expansion from a local game store.

Another really good quick and solo playable game is Carcassonne. So far, I am playing solitaire version by John Fiore from Solo Nexus.
My result so far is moderate success, with around 100 points and unfinished islands.
There are other solitaire variants of this game roaming around the net, and I am eager to test them, as soon as I manage to win this one :). 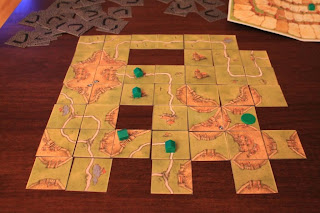 Third game I tried is solo Munchkin. I have Star munchkin, with Clown Wars expansion, and I tried variant also mentioned on Solo Nexus blog but I did not get the same level of satisfaction as with Carcassonne or Castle panic, so Munchkin goes back to the box for now.
Posted by Aleksandar Šaranac at 11:59 PM