Charge of the light brigade, ups...

Real life got in the way one again, and for more than a month I was unable to play any game. What little spare time I had I spent painting a miniature or two, so one thing led to another and finally I have enough models to try slightly bigger Napoleonic event…
The game was played using slightly modified Musket & Mohawks rules by 2HW. 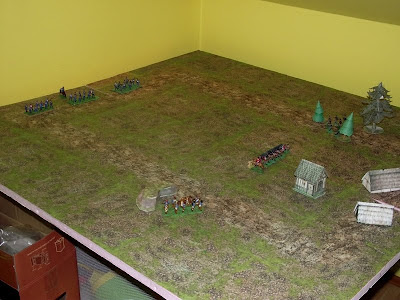 Year is 1809. French light battalion (considering of one unit of Chasseurs, Voltigeurs and Carabiniers) led by Rep 6 mounted CinC is attacking a small village in Spain. Unit of British Foot Guards took a position behind the barricade, as the first line of defense. Rifles unit selected shooting position in nearby forest, while local Spanish militia located behind the small hill prepared to help from reserve. 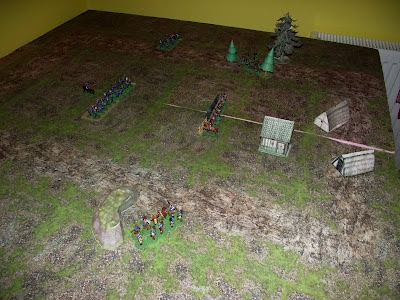 I moved Voltigeurs to the left, to engage rifles, while Carabiniers and Chasseurs connected and marched forward towards guard unit.
In next turn my main body charged at the barricades. Spanish militia tried to join the fight, but passed 0d6 and failed to move, condemning Foot guards to be wiped out.
At this moment I was ready to proclaim my victory and march into unguarded village, but Rifles company had something else in mind. They fired at the flank of my main body, scoring enough hits even with Fire at Will routine to wipe out my Chasseurs, and make Carabiniers run away! Only my CinC left at the center at the field, and this was miracle of the good rolls!
Concluding that things are lost, CinC took fast move towards my table edge. To cover his retreat, Voltigeurs exchanged fire with Rifles, in which officers of both companies got killed.
Rifles stood their ground, while Voltiguers decided that they had have enough.
Clear victory for NPC side.
This time, I definitely learned that firing at the unit flank can be really devastating. Mistake I will not repeat at the next charge :)
Posted by Aleksandar Šaranac at 10:48 PM