Today, I purchased Joust, new mini-game from 2HW.
The good thing with the mini-games like this is that you do not need anything special to play them, just a couple of D6, pen and paper. On the other hand, they are almost always fun.
Same thing goes for Joust. It is good pastime for people like me who spend lots of time out of home on different businesses trips...

Anyway, I created my hero, Sir Giles the Dragon slayer and rolled his opponent, Sir Osis of Liver.
Here are the Brave Knights:

Today they took two jousts one after another, to get familiar with their knighthood.
First of them ended without winner, although Sir Osis of Liver had an edge in the last run. 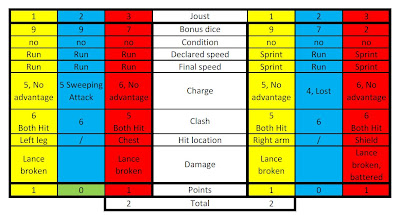 Sir Giles spent some time thinking about his mistakes in first joust, used the lessons learned and ended the second one with easy victory. 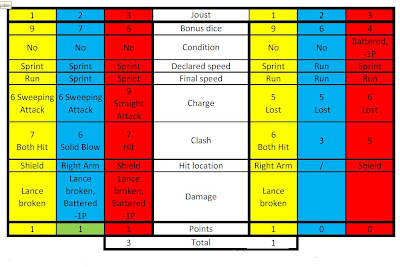 This earned him 9 Fame points and 900 Gold Florins.
But Sir Giles knows he still has a lot to learn. Skill of unhorsing his opponent is still a mystery to him....

Posted by Aleksandar Šaranac at 10:23 PM