I started developing the new AI engine for Song of Blades and Hero rules, so the times has come to test my ideas.

For this game I decided to play ASBH and to take the side of the bad guys - namely humans. My warband had 100 points wizard, Shooter with Composite Bow, Tank with heavy armor and heavy weapon, and 3 low cost warriors, two with spears and one with just a hand weapon.

I played a Quest for magic item scenario, modified in such a way that warbands started in the corners, and needed to exit through the corner to win. 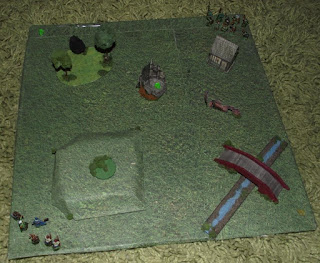 I started the game by sending wizard, tank and archer towards center, while the low cost models moved to take position on the bridge in order to defend access to the marker across the river. 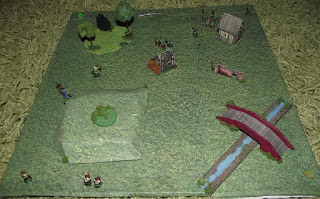 In my Solo system AI has significant activation advantage, so orcs moved fast. They reached first marker before my models, but it turned out to be nothing. 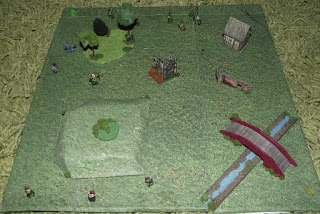 Tank, archer and wizard moved toward the marker in the north west corner, and all the orcs followed them. In this system, AI is not too smart, but it has other advantages and means to challenge solo player. 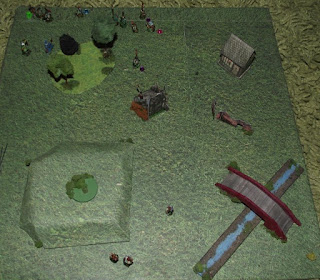 Archer drew the first blood, sending orc spearman out of action.
But then I made tactical mistake. Instead of charging the nearest orc in order to keep enemy warband as far north as possible, at least until my slow moving infantry reach the defensive position, Tank succumbed to the wizard's cries and checked the second marker.

As it turned to be nothing, orcs rushed south towards the final objective, with my warriors still rather far away from the bridge. 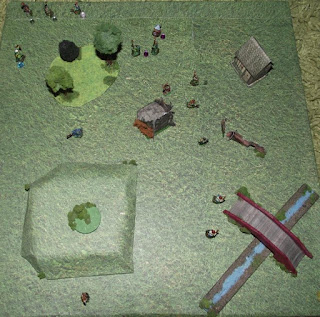 Some lucky rolls allowed my wariors to reach the bridge. 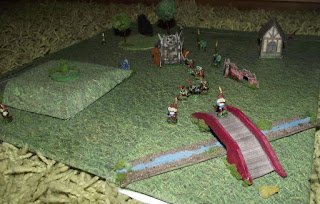 Battle for the bridge was desperate, but despite the odds, warriors managed to survive for two turns, 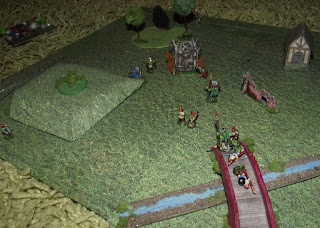 before they were both gruesomely massacred by the orcs. 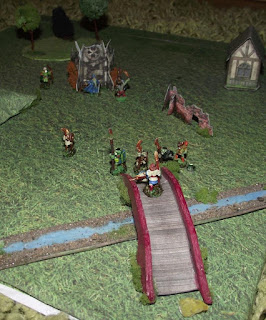 But the valiant sacrifice of two spearman was enough for the Wizard, the Tank and the Archer (who lost his composite bow with the final shot of the game, luckily without consequences) to reach the bridge and kill enough Orc models to invoke the Dead outnumber the Living rules. 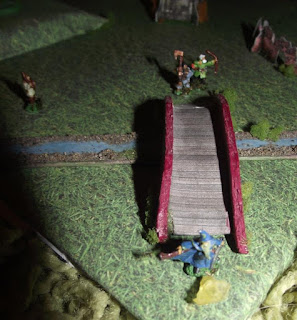 The game was really tense. It ended with a victory to the human side, but only due to some lucky rolls, and due to some holes in solo mechanic design I detected.

While I made the beta rules of the Lone Blade AI engine for SBH already available in some SBH groups over the social networks, I still need to play few more test games and fix some bugs before giving you the final product.
Posted by Aleksandar Šaranac at 9:21 PM