Recently, on TMP forums, user Brigadier General asked community which solo wargaming mechanics they prefer, and my instant response was Song of Blades and Heroes by Ganesha Games.

But then I understood that SBH was not even designed to be played solo, and that there are rules built with solo play in mind out there - namely Two Hours Wargames (and I have almost complete collection from Ed) .

So how it happened that today I prefer to play SBH over THW? Especially when I remember that 5 or 6 years ago I had a real blast playing THW Swordplay rules?

Then, I understood  that THW is here for so long, that there is the Old School THW and the New School THW.

For example, what is In Sight test in Swordplay 2016, in the old CR3: Swordplay from 2009 is a Threat - enemy within 6" taken only by inactive group. As a result of this test, inactive group members reacted to incoming enemy by charging them, firing missile weapons, staying where they are, running for cover or even running away from the battlefield (all possible results based on  character's class and dice rolls). Old rules also had more classes (knight, missile, mounted missile, soldier and warrior), more weapons, and were, all in all, definitely more complicated to play.

So, in order to test my assumptions, I found PDF of 2009 rules, and give them a test run. 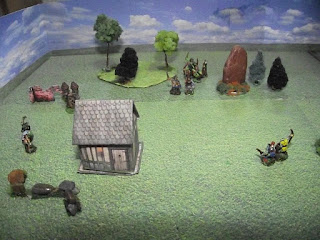 My Orcs approaching the human enemy

And before I knew it, I was playing a second game, and then a third in a row!
For the later games I added PEFs mechanics from the other editions, since i like this kind of uncertainty, but I kept everything else as per 2009 book.

The old edition is definitely more difficult, but are also much more fun to play. In this case, at least for me, the simple is not the better.

Now I am certain - as far as THW is considered, I am an old school player.
Posted by Aleksandar Šaranac at 12:17 PM