A Light Most Faint

I am lucky to be part of the playtest crew for the new Nordic Weasel Games product.

A Light Most Faint is a solo dungeon crawl game, that takes its inspiration from old school D&D - and as such, it's mechanics is miles away from well known 5 Core feel.
Game feels like RPG, plays on the square grid and so far requires lots of book keeping, but it is still in early stage of development.

As it is tradition of old school games, danger for your hero is real, and the player will often find himself creating a new adventurer.

I created a hero and let it loose into the Forest of Fog, introductory dungeon that is part of  playtest package.

First room was a big clearing in the woods that contained no monsters, just some rations. No roads leaded deeper into the forest, so my hero returned to the village of Heaven.

When he returned to the Forest of fog, he first encountered some goblins, and then plague monsters, but he managed to dispatch all of them quickly. After that, he had enough Essentia (experience points in this game) to make improvement roll and rise his toughens (he is harder to kill). 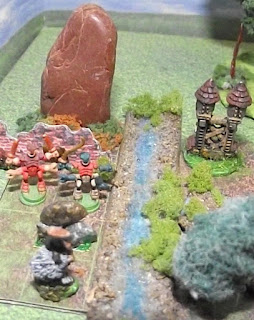 The third room in a row was a 4x3 clearing guarded by a Knight errant possessed by darkness. Fight was intense, but at the end dark knight prevailed, and our hero was slain. 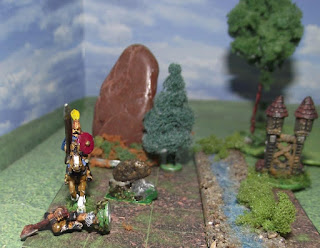 Death of the Hero

If you are interested to become a playtester for this game, contact Nordic Weasel Games by commenting on this blog post.
Posted by Aleksandar Šaranac at 12:55 PM