In last episode, we left our hero arriving in police station where he met Chief O'Reilly.

Q5 (Rory story cubes: Egg, Rainbow)
"It was nice of you to free our TVs Bananaman, but there is more important job to do right now." said Chief O'Reilly. "Mole and The Heavy Mob stole some Mammoth bones from National History Museum. Whispers on the street say that they are giving them to Weatherman, who wants to use them as part of his water controlling machine. You have to stop Wetherman, Bananaman!" 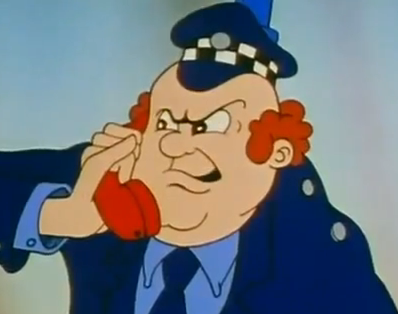 "Ok, Chief,  leave this to me. I'll be going now" said Bananaman while breaking through the police station wall.
(Craw rolls its Bird Like any other dice against difficulty of 5 and passes, with no dye lost)
Then, the Craw showed up: "Boss, while you were getting Dr. Gloom, I was following Mole. It delivered stolen bones to Weatherman in the House on Hangman's Hill. We should go there immediately" 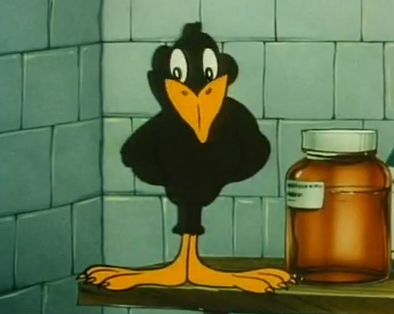 And so our heroes took flight towards the deserted house on a dark and dangerously looking hill.

Q6 (Rory story cubes: Rain, Snake)
Weatherman used a growing gene from Mammoth bones within his machine to increase the level of water in nearby swamp. Water is threatening to flood the city. And all the swamp animals are moving towards city as well.
Bananaman catches some swamp animals (snakes, crocodiles) and ties them together in order to make a dam and stop the waters.
(Twenty big men roll + support from Doctor examined his head once against difficulty of 6. Success, but with loosing of two dices from primary cliché in the process!)
While the dam will stop the imminent danger, waters are still rising and further actions are needed.
(Since this ends Q6, Bananaman recovers one dye on Doctor examined his head once cliché)

Q7  (Rory story cubes: Hammer, Shield)
Bananaman stops in front of the house on the Hangman's Hill, and tries to open the door, but it is locked. While he is standing there, from the window on the upper floor Weatherman throws giant anvil at his head! 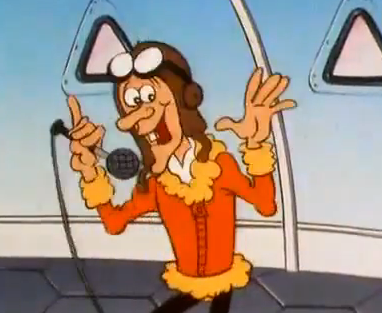 (Twenty big men roll + support from Schoolboy that leads amazing double life against difficulty of 4. Failure! Bananaman looses two dices from the pool of his primary cliché. Only 2 left!)
Anvil hits  our hero right in the head, and drops him to the ground.
(Craw rolls its Bird Genius dice against difficulty of 4 and passes, with no dye lost)
"Boss, stop messing with that door and come here", says Craw pointing towards open window.

Q8 (Rory story cubes: Rising, Waters)
As Bananaman and Craw enter the house, Weatherman increases power on his machine. But dam holds, swamp waters can not grow anymore, so the machine starts influencing sewer waters in the house. Water starts growing from sinks, bath and toilet and flooding the house, and in the proces it destroyed Weatherman's machine.
This brings reversed process into action, water starts falling back, creating vortexes. One such vortex grabs Weatherman and takes it down into sewers! Lets hope that we will never see his ugly face again, banana fans!
But wait! The vortex grabbed Bananaman too! Will our hero also sink into the city underground and be forever lost in its murky waste waters?
(Craw rolls its Bird Genius dice against difficulty of 4 and passes, with no dye lost)
In the last moment, Craw puts plug into the bath drain in the tub that was the center of the vortex.
Bananaman is safe, although he is lying in the tub all washed out.

Q9 (Rory story cubes: Reading, Letter)
Later that day, Bananman is watching the news where Fiona says: "City is safe once more, thanks to Bananaman. Thank you my hero!" "That's me, Fiona" sweet talks Bananaman to TV.
"Boss, you look tired" drops in Craw. "Maybe you will feel better after good, long bath?" 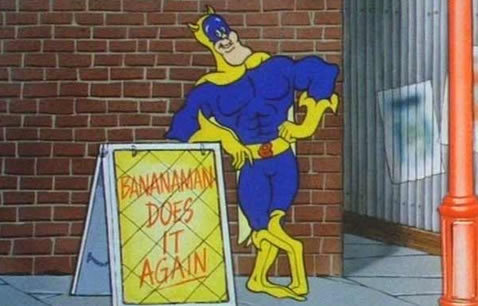 Posted by Aleksandar Šaranac at 2:31 PM