After more then a month without any gaming, I finally found an hour for the hobby.
Therefore, I decided to try new Rally round the King rules by Two Hours Wargames.
This game is usually played with 400 points armies, where 200 is mandatory and called basic army, while other 200 can be selected by player.
Since I had little time, I decided to play a small game of 200 points per side, using mandatory armies.
Machine plays Rodentmen army, as described in the book. They use Penetrate center tactics. Horde is grouped in the center, while skirmishers and giant rats protect the flanks. 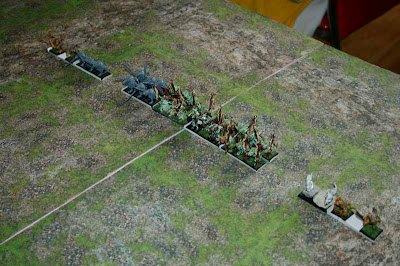 I played undead Egyptians I scratch build using rules from the book. Army of 200 points consists of 4 chariots (mounted dual, shock), 3 foot archers, 1 mounted archer, scorpion and one unit of foot guards (elite) with general. All undead have terror and fanatic special rules.
I positioned archers in front and melee troops in the back. 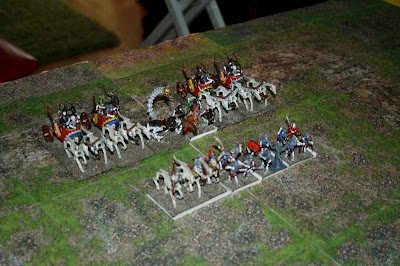 First activation saw horde moving forward full speed. In that way they entered into foot archers range. They fired in their activation hitting horde 3 times. Horde reacted by charging and connected with archers. This would be enough to rout almost any missile troop, but not undead, thanks to their fanatic ability. They received hits, but also succeed to wound horde. 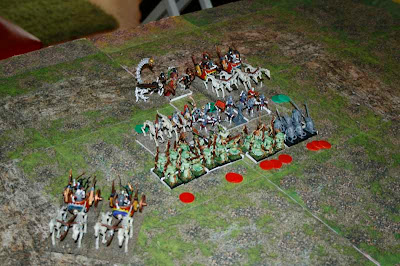 Second activation saw continued melee, and horde managed to dispatch archers, but was left weakened.
I activated my melee units and they charged, routing first line of ratmen. Leader lost test did the rest, finishing the game with undead victory.

Therefore, game lasted only 2 turns. It was fun, especially after long brake from gaming, but the rules practically played themselves. Only tactical decision I made was deployment, after that system just brought me to conclusion. This may be similar to the real historical battles, where tactics were decided before battle and seldom changed in the event, but I would prefer little more freedom. On the other hand, this system is made to be played with 400 points, while I used only half of that, so maybe full points game offers bigger tactical possibilities. But this is something I still have to test....
Posted by Aleksandar Šaranac at 7:13 PM