This is my first adventure in the world of a solo RPG Colostle, recently funded through kickstarter..
From house rules, I used only Oracle (see this link), and I disregarded class rules. 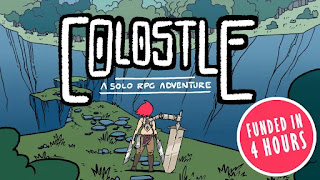 My character started as a 4 exploration / 2 combat adventurer called Otter, looking for knowledge about Rooks - strange stone semi-sentinel automatons that roam the Coloste.

Traveling through the land, Otter finds remains of the strange machinery. It seems to be broken. No part of it moves. Massive electric Rook seems to be guarding machinery. Using some strange form of communication, Rook informs Otter that it will teach him about Rooks if he helps repair the machine.

Solution to the machinery condition lies with a massive ice Rook, buried within a cave in a seaside cliff. Otter should be aware that there are traps…

In order to prepare for the mission, Otter decided to visit the remains of a medium ice Rook he knows about. But there are already 2 scavengers at the Rooks site, and they attack Otter. Combat is quick, and deadly, scavengers are not a match for Otter skill. (2x treasure)

Otter tries to enter Rook shell, but the trap activates, surrounding him in ice. From its trapped position, Otter can see one of Rooks windows, and through it, a small village. The village is not there if you look from outside of Rook. The window of a Rook is too small for human to pass through, but big enough for someone to give some object inside.

Otter tries to combat the ice trap surrounding him but fails, only earning two wounds.
Then, he starts to scream hoping that villagers will hear him and come to his help.
Oracle: will this plan succeed? Yes.
What happens:
One villager reaches through the window and gives Otter an ancient item - some kind of strange torch that once was part of electric Rook. It has only one charge (the item is mostly rubble - 4 spades).
Otter uses the item’s charge to melt the ice trap.
Can Otter establish further communication with the villager? Oracle says no.

Otter then travels towards the sea. On the way there, he meets a strange person wearing a castle symbol on a robe. Upon hearing about Otter’s mission, Castle Guard decides to help and gives him a mace made from rook finger - strange weapon indeed - combat + 1.

Otter arrives at the sea cave and finds a massive Rook buried inside it. He fights Rook’s ice trap and is victorious, even if gaining 2 wounds. This Rook’s portal window is big enough for Otter to pass through, so he moves to the other side.

Our hero finds himself to be in some other cave. This cave is used as a camp by a group of humans, but they are all sound asleep and nobody notices the new arrival.
Among the sleeping people Otter finds a cage with a very small Rookling inside.

Moving quietly not to wake up anybody, Otter takes the cage and returns through Ice Rook. Road back is uneventful and Otter quickly arrives back to where he started.

He took the Rookling out of its cage, and big Rook put it into the machine. Operated by a small robot, machine parts start moving, but no visible output comes out of that.

Satisfied, massive Rook thanks Otter. It further tells him that Castle Guards use items called Ticket Keys to direct exit location of Ice Rook’s window portals, and that they are using them as means of transportation through the Colostle.
Then, Rook gives Otter one such Ticket Key.

THE GOOD
First thing that you see when you get this book is beautiful art.
Another great thing that simply shines in this game is world where it all happens. Game is located within the castle so big, that mountains, rivers, even oceans are located inside its rooms.
The rooms of the castle are roamed by semi intelligent automatons called Rooks. This material for solo RPG is just great.

THE AVERAGE
Mechanics of the game is based on a standard deck of cards. Each turn is divided into two phases - exploration and combat.
In exploration phase player draws cards, finds their meaning in the table, and creates story based on that. It has opportunity to create great story lines but player needs previous solo RPG experience, it is not very beginners friendly.
Number of possible results is rather limited, with 10 red and 10 black cards (suits always represent encounter with Rooks). Also, some card meanings are to concrete (like: you fall into trap, club you avoid it, spades you are captured) so occasionally it is difficult to fit it into current adventure concept.
Combat uses paper/rock/scissors push your luck mechanics that can create interesting outcomes.

THE BAD
Where the game falls are mechanics. They definitely need some important house rulings to actually work.
Classes of the game differ just by number of cards drawn in each phase, and this is something that changes during the game. Classes have no mechanical differences even if they were easy to implement - like one class could be better when fighting Rooks, others could have additional healing or similar.
Lots of things are just for the mood sake when they could have been used mechanically.
Additional minus is the fact that the game never addresses player actions. It never asks player: what do you want to do now? There is also no way to answer player's question - like oracle or random idea generator. Also, there is no way to resolve non aggressive actions other than combat.
For example: my character is locked in ice trap inside the Rook. Previous exploration scene told me that Rook stands in front of small village. I tried to fight the ice trap but I lost. I could fight again, but it would create the death spiral. I want to scream hoping that someone in village would hear me, but I have no option for that. I can just create exploration scene hoping to deduct from that if my idea succeeds or not, but this could turn difficult with the way exploration table is created.

This game had potential, but it was not playtested properly and therefore it was published way before it should have been. With some house ruling it could create interesting stories, but it may be more trouble than it is worth. Maybe it would be easier to use just the setting, and then play another game mechanically to explore its possibilities.

Posted by Aleksandar Šaranac at 8:56 AM