Siekatsu blowed me off my feet

Sometimes there are the games that blow you off your feet even before they are publish. Sometimes it is enough just to read the rules or see photo of the components.
But no game have ever made such initial impact on me like Seikatsu that will soon be published by IDW Games. 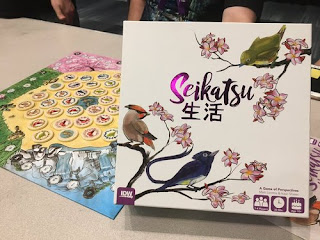 Photo from BGG entry of the game

The game should be available at retailers in September or early October, but I just could not wait that long to try it.
So, I decided to make a simple prototype of the game that could serve me until I get the real thing, especially as rulebook and low resolution image of the board are available on the internet, and playing discs are not so hard to make. 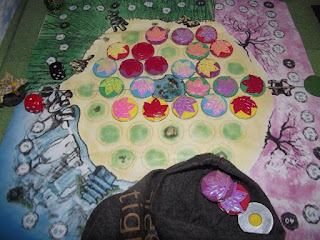 Disclaimer: following opinion is based on the home made prototype, not on the real thing made by IDW Games.
Seikatsu is an abstract game meant for 2 or 3 players with solo option. It is an abstract game of laying and matching discs with the original scoring mechanics that makes it really interesting. But it is also a peace of art. This thing looks astonishingly beautiful on the table even as the prototype, and I can only imagine how good will the original look.
As two player game, it should be a hit for a couples. My non-gaming wife at the moment wants to play only Patchwork with me. Once I get my hands on the real Seikatsu,  I believe that I will have no problems to make her try this.

And now we are coming to the most important thing. How does this game fares solo?
In solo mode, player tries to achieve more points than combined score of 2 virtual players. Designers planed 3 difficulty levels in solo mode. Easy (no sense to play), medium (easy, no way to lose if you know what you are doing) and difficult mode that gives the real challenge feeling to the human player (after 20+ solo games in difficult mode AI usually beats me with 3 to 5 points difference, and playing makes my brain burn, which is exactly what I expect from my solo games).

Once it hits the stores, Seikatsu will be highly recommended game by me.

Posted by Aleksandar Šaranac at 2:10 PM