News and the lack of it

The reason for the long break between the posts is the fact that I have recently put more of my gaming time into board games, and there is much less story there than with wargaming or RPG.

I had a chance to purchase Friday and Onirim on the local used games market.

I was really excited to be able to play Friday, but the game itself was a bit of a disappointment. Not that the game is bad, it just wasn't exciting enough for me, and I had no reason to play more than couple of games.

On the Other hand, from Onirim I had no expectations, especially having in mind that I acquired first edition of the game (with only 3 expansions comparing to the 7 in the second edition) and the edition in German language (lucky for me, Onirim is language independent game and the rules in English can be downloaded from internet). So, Onirim was quite a surprise for me.
I could not believe how atmospheric can a set of cards be in a solo game. I really have that feeling of wandering trough the labyrinth of nightmares. 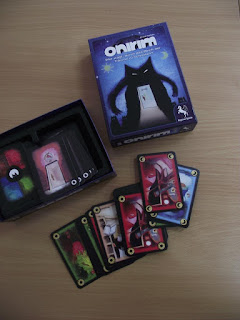 At the moment I am playing base game with the addition of Towers expansion, and I can not get enough of it. I am still to try other expansions.

Also, June 1st will mark the start of the 2016 BGG Solitaire P'n'P Contest, so I am preparing my candidate.
So far just a quick teaser picture: 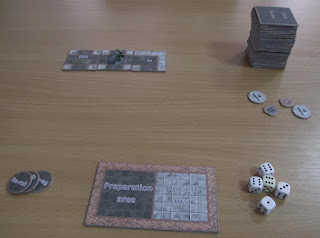 Game will be called Dungeons of Light and Darkness, and will use tile and dice placement push your luck mechanic. Elements are ready, game is playtested from my side, and now I am working on writing the best rule-book possible. But more about this game in June.
Posted by Aleksandar Šaranac at 10:53 AM