Recently, I had a chance to play several solo dungeon crawling games, from different publishing companies.
One of them is 4 against darkness by Ganesha games.

So, team consisting form rogue, cleric, wizard and elf descended into the dungeon. 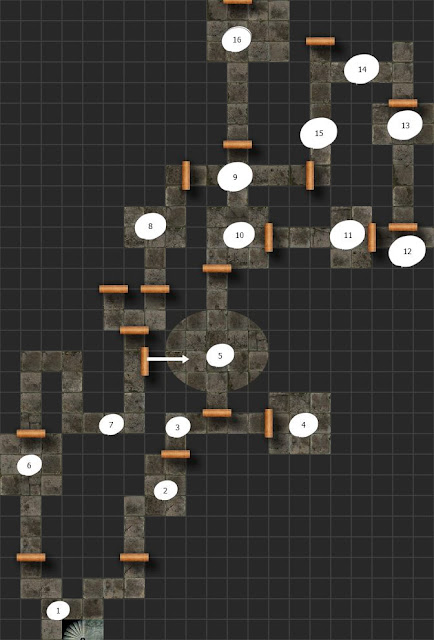 1. Entrance
2. Trapdoor, guarding 5gp. Rogue disarmed it.
3. Empty room. Elf found a clue leading to the location of the rich merchant who dissapeared here recently.
4. Another empty room. Nothing here.
5. This room is a home of the small dragon. Party retreated from the room, shutting the door behind them, but not before they were all burned by dragon's breath.
6. 6 Fungi Folk. After killing them, party found wand of sleep that was given to Wizard.
7. 2 Trolls were guarding this tunnel. On their bodies, party found another wand of sleep. This one was given to the Elf. This tunnel contains a short-cut to dragons lair, which party noticed for the future.
8. Party met wandering alchemist, but they were not rich enough to buy anything from him.
9. 3 trolls on the crossroads. Tough fight, but only 5gp of treasure.
10. 6 orcs. Same as above.
11. Weird monster - iron eater. Put to sleep by wizard. Elf gains a level.
12. Empty tunnel, but the search brought attention of wandering boss monster - Orc Brute. Wand of Sleep did the job again, but party become seriously injured by this time, s they did some healing. Wizard gains a level.
13 and 14 - empty, containing clues. Elf was now sure that merchant is near.
15. Level 4 trap, disarmed by rogue. 130 gp hidden. Finally a better loot. Returning to crossroads, party encountered 4 giant centipedes (wandering monsters) but they were easy pray for our heroes.
16. 6 zombies guarding a merchant chained to the wall. Party killed the undead and saved their target.
On their way back, party was attacked by a boss wandering monster - a mummy. wizard hit it with the fireball, and cleric finished the job. Rogue tried to level up but rolled a 1, so he stayed on the first level.
The party escorted merchant back to town and picked up their reward.

Verdict: 4AD is a fast game - you can play a level of dungeon within an hour. What I really liked are monster reaction tables - when you meet a monster you can select to take initiative and attack first, or roll to see monster's reaction. Some monsters will fight - and then they strike first. But some will run away, or let you pass, ask for a bribe, offer help, and some will even give you quests.
Another important thing to know is that 4ad is a light game. You can play it anywhere and everywhere, all you need is some graph paper and a way to roll some d6. Still with quests, clues, etc, there is enough material for 10 to 15 games before you explore main possibilities. So far, basic rules offer just one level of the dungeon, but main book mentions expansion called Deeper levels that is in the pipeline, that should provide further fun.
Finally, for the more creative type out there, this game is fairly easy to customize to your taste. Player can create tables similar to the ones from the book with ease, and it will not spoil the fun of exploring the dungeon.
Recommended.

PS. There is also a competition by Ganesha games, so if you play 4AD and make an AAR of your exploits, connect the publisher, you might get a chance to win some Ganesha games products.
Posted by Aleksandar Šaranac at 9:10 AM