For a while I wanted to do a solo dungeon crawl using 5th edition of D&D.
Finally, I found some time for that, so I rolled a hero, half elf bard named Loneflute, and I went into adventure.

The dungeon is generated according to Appendix A: Random Dungeons, from the GM guide book.

The only thing i added is a random monster generator. So far, I created one only for first level characters.

When a monster is rolled on the Dungeon Chamber Contents table (GMG pp 296), I first roll 2d6 on encounter level table to define number and CR of the monsters. Then, I roll on the appropriate CR table to define what kind of creatures I met.It works, as you will see.

So, here is the adventure.
Loneflute entered the dungeon. Starting area was 4x4 square with 3 doors. There were wooden doors to the left and right, and portcullis straight ahead. Loneflute decided to examine corridor behind portcullis first. 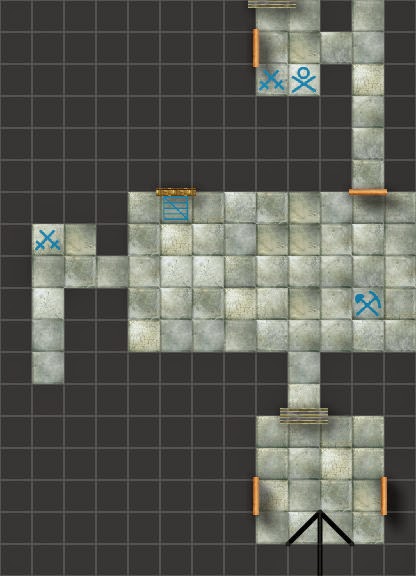 After short corridor he entered 9x5 chamber. It was empty chamber with hidden treasure, but Loneflute failed perception check and missed opportunity to increase his wealth.
Chamber had 3 additional exits. Locked iron door to the North-West, wooden door to the North-East and open corridor to the West. He went that way. Another short corridor ended with small, 2x2 chamber. Chamber was inhabited by a monster with no treasure. Rolling 2d6 on encounter level table resulted in roll of 3 and that equals to 4 monsters CR0. Further rolling on CR0 table, resulted in 8, so there were 4 bats. Loneflute killed them, earning 80xp, but he lost 6HP in the process.
Corridor to the South resulted in dead end so Loneflute decided to take a short break and heal - good roll on d8 resulted in healing all 6 hp.
Loneflute returned to the big chamber and took North-East passage. There he soon entered another chamber - again monster with no treasure. It was single CR1/4 monster. After rolling 2d10, it turned to be a Troglodyte.
Not all CR1/4 monsters are made equal, and Troglodyte is among the worst of them. But Loneflute was too stupid to understand it. Instead of running away, he decided to fight. So, he failed to surprise the monster, then got poisoned and finally killed by two good strikes from monster's claws.

This was fun. I plan to roll new character and try again very soon.
Posted by Aleksandar Šaranac at 2:23 PM