The very first kickstarter project I put my money into was a game called Battle for souls, by Robert Burke.
Of course, I opted for print and play version, since delivery costs to my part of the world were almost equal as the price of the game itself.

And recently files have landed to my my inbox.

Battle for souls is a 1 or 2 player card game where players choose side of Heaven or Hell and try to earn victory points by convincing souls from Earth to join their side.

Since I am primary interested in solo experience, I printed just a Hell side cards so far (Heaven is for girls, right ;) ).

Here is the photo from one of my first games. 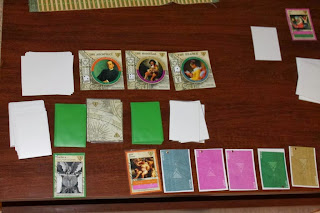 Except from souls you are fighting for, game consist of two types of cards.
First type are Temptation cards. Basically, these are 7 differently colored sets of 6 cards, that player tries to arrange into well known poker configurations (one or two pairs, 3 of a kind, full house, etc) in order to get benefits. The color matching between Temptation cards and the Souls is one of the main mechanics in this game.
Second type are special cards that help player earn victory points, and they can be Devils, Sins, or Unholy relics, each with its own specifics.

There is no enemy AI in solo game. Player competes against cards and races against time trying to score 40 victory points before Temptation deck runs out.

The game plays quickly, and I managed to play two games within 45 minutes. I lost them both, reaching 32-33 points, which seems to be average score for inexperienced player. On the other hand, I played these games rather mechanically, with no clear strategy, with the single goal to get familiar with the mechanics. Still, it seems that my decision were important, I was not left to the luck of the cards, and I hope to win some of my next games by preparing my tactics.

As a conclusion, I am happy that I backed this game on kickstarter. It is an interesting game that can be played quick, and that can be played out of a box, which is at this moment really important to me considering that my second kid will be born in less then a month and that my gaming window will probably become even smaller than it already is.

Highly recommended.
Posted by Aleksandar Šaranac at 9:35 AM